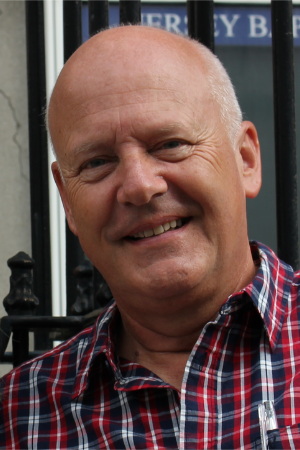 Born in Bristol and moved to Jersey when he was 6.  He left school and studied at the School of Architecture in Birmingham where he met Jackie, his wife. They set up home north of Birmingham and had 2 daughters, Vicky and Rachel and came back to Jersey when Rachel was just 6 weeks old.

Jim and Jackie both came from a non-christian background and led a ‘normal’ but worldly life.  Jackie had several brief church encounters over a few years and when faced with a health issue knew she had to turn to Christ, which she did.  Jim was perplexed at the huge positive attitude change in Jackie that he decided he had to investigate further. Just a few weeks later Jim found Christ at age 40, some 22 years ago, when his world was turned upside down on discovering his world view of creation, ie. evolution, was just not true.  Roger Bishop and several others over many years at Jersey Baptist allowed, tolerated and assisted his knowledge and Christian growth.  Although not a preacher, he has a desire to help and guide others to a saving knowledge of Christ.